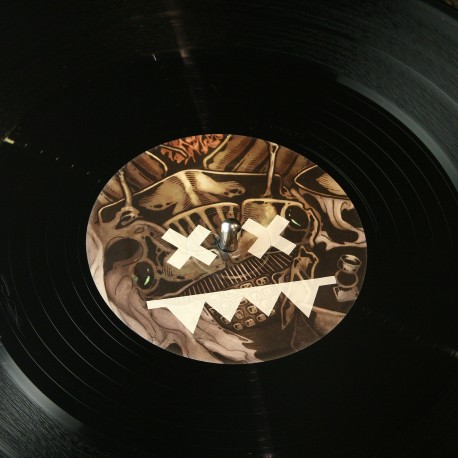 SIGNS – NAKED LUNCH EP
EATBRAIN015
Hailing from Toulouse, French trio Signs have already carved themselves out an interesting niche within the nu-skool neuro scene, stamping their unique output into the public’s consciousness with big releases on Red Light Records, Bad Taste Recordings and C4C Recordings.
Their beats are sparse and militant with each drum hit afforded the space to dominate the audio spectrum, with pauses and moments of silence, delicately programmed into the DNA of the drum tracks, playing big part in the groove’s forward momentum, propelling the riddims forward and creating a dynamically powerful and compelling backbone for the rugged, tough basslines to shine.
The tunes are punctuated with wild Reese fluctuations and sci-fi sound effects reminiscent of the Wormhole-esq techstep from the end of the last century, with dark atmospherics ushering each trackdown the rabbit hole and into the dank, hellishbasements of debauchery that tunes like these call home.
Interzone kicks things off with a clipped, jerky drum beat before a transformers bassline slams into focus in a delightfully rigid yet fluidly modulated fashion.
Percuss starts of life as a Clive Barker horror film before neurotic neuro synth work and tech sound effects combine with a stripped back drum beat to devastating effect.
Back Meat opens with a mournful pad refrain before launching into trademark Signs territory with muted reese bass joining disjointed drum work and high pitched strings.
Vermin is a hyperactive drumstep referencing number peppered with jungalist fills, acid squiggles and experimental IDM tinged flavours that recall some of the more recent work of producers such as Amit and others working at the more exploratory ends of the neuro and techno influenced spectrum.
To wrap up the release, the label boss - Jade joins in for the ride, with an upbeat speed-roller remix of Vermin.