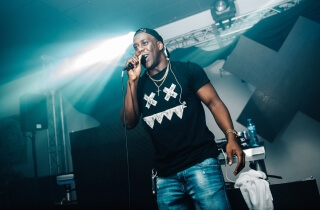 MC COPPA cuts a sharp figure in the expansive landscape of electronic music. His fierce and charismatic dedication to illustrating diverse and precisely crafted music with his intelligent and poignant words; delivered with the accuracy of a veteran and the creative flex of an artist whose vision stands uniquely explorative. His intense and dedicated work ethic is widely recognised, with an undeniably impressive array of releases on truly tastemaking labels, both in the realm of drum and bass where he carves a significant part of his path and outside of it. Through his significant catalogue he has established himself as one of the most recognisable MCs currently operating and an exceptionally desirable collaborator to work with from the perspective of some of the leading producers of our time. The distinctive tone of his voice and delivery, oscillating between pointedly acute and a shade of soulful warmth, makes him instantly recognisable on every audio slice and imprint on which he appears.

His passion for getting on the mic emerged from a early love of hip hop and ragga, and as he grew up in the North of England, with rappers such as Nas, Ice Cube, Mobb Deep, Task Force, BlakTwang, London Posse, Skinnyman and dancehall artists such as Buju Banton, Sizzla, Capelton, Anthony B catching his attention and beginning his fascination with lyrics set within electronic music. with his exposure to jungle/drum and bass in the very late 90s having a big impact on his tastes, he started performing on a local pirate radio station, he quickly developed a reputation that led to doing shows across the UK every weekend and soon after expanding to wider Europe.

As one of the key figures in the movement of MC´s bridging the gap between live performers and recording artists in drum and bass over past years, MC Coppa has been busy building bridges between vocal led genres such as grime / hip hop with drum and bass. His objective in creating accessible drum and bass for the casual listener, as well as delving deep into the underground, have been met with wide success and appreciation of his output. In recent years he has been declared the winner of best International MC in the Czech & Slovak drum and bass awards 6 years in a row, with 4 nominations for the same accolade in the Uk’s Drum&BassArena Awards. One of the driving factors of this success has its roots in his dedication to writing more meaningful and deeper messages, touching on everyday life and subjects both topical and political, but still packaged in a beguiling and entertaining way. Having gained an understanding first hand of the power of music and its influence on listeners, his future pursuits as an artist lie in the maturation and evolved next phase of his career. Expect the fusing of more elements of hip hop, ragga and melodic vocals and hooks across a wider range of styles and genres.

With the release of his 2nd LP ‘Poetry In Motion’ on Shimon’s renowned Audioporn imprint, he set out to make just such a statement, with fluid switches between sub-genres and moods that eloquently demonstrated his diverse intents. Performances of both his COPPA LIVE show and hosting with other leading djs have occurred globally, including dates at some of bass music’s most significant festivals such as Sziget Festival (Hungary), Volt Festival (Hungary), Dour Festival (BE), 4 years in a row at Let it Roll (CZ), Laundry Day (BE), European Music Day (Greece), Grape Festival (Slovakia), Pohoda Festival (Slovakia), Boomtown Festival (UK) - firmly establishing his credentials as one of the leading MCs of the last decade. He has performed in over 37 countries worldwide with over 100 releases across drum and bass labels including Viper Recordings, Playaz Recordings, Technique Recordings, Eatbrain, Liquicity, AudioPorn, V-Recordings, Renegade Hardware, Commericial Suicide, and across wider labels including Kruder & Dorfmeister’s G-Stone label, Cut La Roc´s Rocstar Records, the legendary SKINT rec, Freestyle Records UK, as writer on Bob Sinclar´s Yellow productions and techno legends Len Faki´s Figure Rec & Francios K´s Wave Music, alongside of host of compilation releases on Warner Music/Sony Dance, Universal & BMG Germany.

A new LP is in production alongside a slew of solo Coppa material and collaborations. The stage is set for one of the brightest and most charismatic MCs to evolve to incredible new heights.