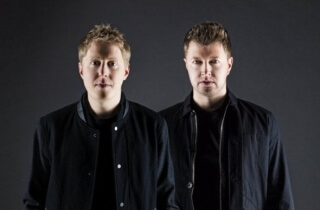 Drum & Bass duo DC Breaks have made their way onto the widest range of playlists. Their hardcore club cuts have been rewound by the likes of DJ Friction and Andy C. On the other hand, the songwriting ability displayed on the single ‘Faithless’, featuring Bianca, has plastered them all over the radio. That’s just the tip of a very large iceberg. DC Breaks have earned their stripes in the underground but, with an album due in the Autumn and a packed festival season ahead, they’re about to explode onto the international stage in a spectacular fashion.

“The album is unlike anything we’ve done before,” enthuses Chris Page, 6’4” production dynamo and the ‘C’ in DC Breaks, “Good songs underpinned by seriously bangin’ drums and bass. There’s even live strings that make it really organic and fresh. I get down deep into the beats and Dan is really good on the songwriting and production.”

“Chris is the bigger drum & bass-head,” admits Dan Havers, the blonde, ebullient other half of the duo, “As a musician I go off into my own world but Chris always brings me back to what works. We’ve always worked so well together.”

Since signing to Andy C’s Ram Records they’ve carved a reputation for delivering world class remixes for some of the biggest names in pop. Their work on singles by Paloma Faith, Lady Gaga, Lana del Rey, Tinie Tempah and others, and production for Example (a cut on the ‘Playing in the Shadows’ album) woke the pair up to the possibilities offered by vocalists. It was the start of the journey that led to the forthcoming album, packed with crossover cuts such as the piano-led ‘Breathe’ featuring Dave Gibson, with its contagious, urgent chorus. Or the soulful explosion of ‘No One Like You’ sung with passion by Niara Scarlett. Or the epic blast of ‘Salvation’ wherein DC Breaks take heavy duty bass sounds and tie them to uplifting, irresistible vocal hooks.

The pair met at Edinburgh University but both had already been dabbling in dance music. Chris, originally from Ealing, worked his way from punk skater fare into The Prodigy then…

“A friend of my sister’s had a Logical Progression tape that I stole off her,” he laughs, “I had it constantly on my Walkman alongside a tape off [pirate station] Kool FM with Brockie and Skibadee. It showed me different sides to jungle.”

He learnt well, hanging round Blackmarket Records, going to nights such as Renegade Hardware and Ram at The End, as well as sketchier raves at Bagleys Warehouse and the Stratford Rex. At home, always drawn to computers, he made primitive attempts at music on his Amiga 600 and Playstation.

“I’d played guitar since I was 10,” Dan, also from London, recalls, “but when I was away at school I met a guy who had a couple of crappy belt-drive turntables, mixing hardcore records and fledgling drum & bass. He inspired me to get some of my own, then I realised the school had a tiny production studio with a couple of old samplers. In my penultimate year they upgraded it to a state-of-the-art recording facility but I was the only kid out of 1500 pupils who knew how to use it.”

The pair met through a mutual acquaintance, a trombone-playing drummer who lived with Chris but played with Dan. Going under the monikers Kryptic and Samurai, Chris and Dan cut tracks for the Scottish drum & bass label Restless Natives.

“The fact Scotland had a limited drum & bass scene worked in our favour,” remembers Chris, “They had some great drum & bass nights. Being bigger fish in a small pond helped us up the ladder.”

The pair soon found they had a rare creative chemistry and DC Breaks was born. When they finished university, they moved in together and kept producing, starting to hit their stride. Chris eventually moved to Bristol, his studio housed in the basement of a city centre warehouse, a location he then lived in for years, initially without electricity or running water. Dan gave the desolate warehouse a shot but eventually moved back to London. However, they continued working together. Chris survived on wages from a surfer-centric wave’n’weather forecasting site, while Dan fired out nu school breaks singles but saved most of his creative zest for DC Breaks. Success started to show, with cuts such as the tough sci-fi sounds of ‘Halo’, ‘Romper’ and ‘Taken’ on Futurebound’s Viper imprint and the Ram sub-label Frequency.

Once they graduated to Ram itself, with monster cuts such as ‘Shaman’ and last year’s battering ‘Lock-In’, they hit the drum & bass A-league. Before long it wasn’t just the drum & bass scene paying attention. DC Breaks tunes made it onto BBC Radio via Zane Lowe, Mistajam and Annie Mac.

“Chase and Status opened the door to drum & bass being accepted in the mainstream,” says Dan, “and through that door went DJ Fresh, Wilkinson, and now us.”

It certainly looks that way with appearances at multiple 2015 festivals, including UKF, NASS, SW4 and Glastonbury.

“I love the wildness of festivals,” says Dan, “Like we played on Arcadia’s outdoor stage last New Year’s Eve, in this big tower with fire blasting out of it. I was literally three or four feet directly underneath the flame-thrower in a really small box. If something goes wrong we were literally toast!”

If DC Breaks can avoid being fried by flame-throwers, the summer will be theirs. By the end of 2015, with their debut album blowing up everywhere, the year might well be too.