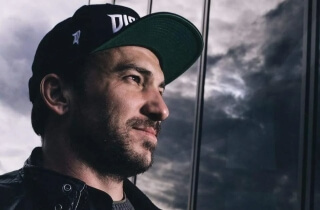 Vienna is home to one of the most celebrated drum & bass scenes in the world outside its birthplace, Great Britain, and this can be attributed in large part to the dedication of one man, DisasZt, or Daniel Fürst-Zoffel, as his mother would call him.

DisasZt is an undisputed key player in the Austrian drum & bass scene. Thanks to his more than 15 years of involvement in almost all areas of this culture, this underground music genre has been able to develop constantly.

DisasZt began his musical career as a DJ in 1998 by founding the crew Bass Infection with his Austrian colleagues Phazes and Dom.n.k. In a relatively short time, the collective was booked nationwide.

In 2001 DisasZt brought the Drum & Bass community into shape. He organized parties in many Austrian cities and in 2002 he established the Mainframe event series at the Vienna WUK-Club. The popularity of these club nights meant that the event had to be moved to a larger venue for 2000 people. The ARENA in Vienna thus became the main venue for Mainframe.

DisasZt's talent and his passion for the Viennese nightlife led him to the courageous decision to found his own club. The ZOO became his heart project, that DisasZt and a handful of friends built with their own hands. The ZOO became an essential center for urban culture and music. DisasZt created a stage for the freshest talents in techno, reggae and dubstep. As the world-famous platform grew in popularity, he launched the Basscity series of events, which was intended to provide an exclusive stage for the greatest Austrian artists in particular.

In 2011 DisasZt started to organize the annual "Mainframe Open Air Festival" at ARENA, which hosted well-known international acts and had several thousand visitors per day. Mainframe became more and more popular and in 2019 the event moved to the Gasometer, an even bigger venue for over 3500 visitors. At the same time, DisasZt's tireless work and exceptional care of the Drum & Bass network enabled Mainframe to become a regular stage guest at Europe's biggest festivals such as Nu Forms and Beatpatrol, finally to manifest its place.

More than just a club night: MAINFRAME, the Drum & Bass label In 2008, Mainframe started to become one of the world's most respected Drum & Bass labels. Mainframe Recordings is credited with the discovery of superstars of the scene such as Camo & Krooked, Hybrid Mind, The Prototypes, Fred V & Grafix, Xilent and Dossa & Locuzzed. Because of this exquisite A&R, the portfolio is championed by Drum & Bass' most prominent gatekeepers such as Fabio & Grooverider, Friction and Annie Mac.

The past years and the numerous worldwide collaborations with the biggest names of the scene have shown the versatility of DisasZt, from the funky flings of 'Rumours', a collaboration with Shimon and Coppa, to the extraordinary production of 'Ribcage', released on the famous Technique Recordings, to the crossover dancefloor of 'Don't Know Us' featuring Marianna Ray. Melodies like these, together with his flawless mixing skills and energetic performances, have earned him prestigious appearances all over the world, from South America to Japan, as well as major events such as "Sun and Bass" in Italy or "Let it Roll" in Prague.