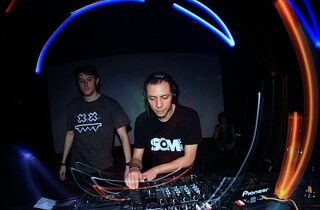 Disphonia is a Greek-based production/dj duo consisting of Kostas Nomikos and George Roubinis. As respected for their incredible precision and creative mixing in their live performances as they are for their attention to detail and pure energy of their original produced material, Disphonia stand as one of the most consistent and uniquely powerful forces in drum & bass. Highlights of their work to date have included releases on Eatbrain, SOM, Red Light Recordings, Terminal and their joining of the MethLab agency and collective.

They discovered their shared passion for drum & bass in 2006, with a mutual love for creating tech-influenced sounds, raw and gritty bass-lines and deep soundscapes. Their main aim since then has been to strive to produce an ever-excelling output of fresh material. Being a part of the Funxion Crew - a local event promoting and dj collective - they played a key role in presenting some of most established d&b acts to the Athens scene. During the past ten years Disphonia have performed with artists such as Optiv, Gridlok, BSE, Noisia and Calyx&Teebee,.

Their first release came in 2011 with 'November' on Mindtech Recording's "No Future" LP, closely followed '1987 Demons/Time Machine feat. Camelorg' in conjunction with the acclaimed French duo, Kantyze, on Berlin’s Trust In Music label. The 12" Vinyl single reached No.1 in sales, within the first week of its release,on Juno Records store. In 2012 Disphonia brought out their second solo work 'Collapsed' on the French label M-atome which had wide success and was supported by numerous Dj's like Dose and State of Mind and which has put them well on the map. Further releases came on Trust In Music and SOM Music. Through extensive touring, 2013 connected them to Dementia & Rregula on a track entitled "Hightimes" released on Full Force Recordings. The year drew to a close with the duo’s collaboration with Dose for "Stateside" on the Dutty Audio Label. Later they joined forces with L33 to create "SSD" a simplistic & infectious stomper for Rise Audio as well as collaborating with Dementia & Rregula resulted in "Doom Loop", a menacing techno-infused tune for their Turning Point LP on Citrus. The duo's contribution on Eatbrain's VA LP "Tales of the Undead" was notable with their relentless track "War Bunker" which became a neurofunk anthem admired by djs and ravers across the scene.

Picking up after a short hiatus in 2016, Disphonia returned to the forefront of the rave, with the release of Energy // Back to the Old School on Optiv’s Red Light label, and Tread Lightly on Terminal. With the duo back in the studio and working furiously, 2017 is set to deliver a fresh wave of material on a stunning array of labels, including MethLab Recordings.