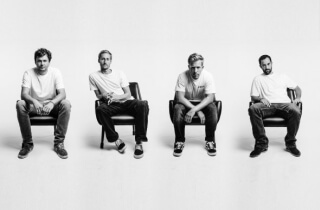 Prepare yourselves for a high performance, sonic onslaught as we introduce the most breathtaking drum & bass outfit to have emerged from Austria in recent years, Fourward.

Influenced heavily by the likes of Bad Company, Noisia and Ed Rush & Optical, the collective formed back in 2007, bringing together a myriad of styles into one slick package to take the scene by storm with huge releases on a host of prestigious labels including Virus, Vision, Audioporn and most recently SGN:LTD.

Their breakthrough release came in 2009 on DJ Trace’s legendary DSCI4 label while their collaboration with Body & Soul on Ed Rush & Optical’s Virus Recordings took their profile to the next level with support from all corners of the globe. Since then Ludwig, Lukas, Dominik and Nik have travelled the globe as their renowned DJ sets continue to set dance floors alight with their own trademark take on drum & bass.

With the recent success of their hit remix of the Upbeat’s ‘Alone’ on Noisia’s Vision Recordings and 2013’s 'Aftermath' EP on AudioPorn Records perking up the ears of a certain Friction on BBC Radio 1, it wasn’t long after that the call was made; the year culminated in their signing exclusively with Shogun Audio. Kicking off this new chapter with the jaw dropping ‘Black Tooth Grin’ single on Shogun’s sister imprint SGN:LTD in October, plus their forthcoming outing ‘On A Knife Edge’ included on the Way Of The Warrior 2 label compilation, Fourward have marked their card ready to kick down even more doors in 2014 and beyond.