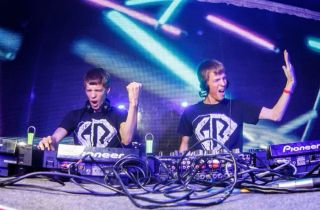 Saint Petersburg natives and identical twins Alexey & Dmitry Goncharenko are Drum & Bass producer DJ's that have made a serious mark on the scene in the last 2 years. Their interest in electronic music emerged in late 2003, and by 2007 they began to release their own productions to the delight of both fans and the label bosses they looked up to from the start of their career. Combining a several sub genres of drum and bass the Boys quickly found their own signature style, combining frantic breakbeats and complex arrangements, resulting in a hi-voltage musical assault. They have also been instrumental in establishing the "crossbreed" sub genre across a wider audience.

The identical twins on-stage presence is unmatched in its visual aspect as well as its energy, making them a unique live show and very popular across Europe. Having worked in the industry since 16, the Twins have are regulars on the Drum & Bass circuit, headlining regularly over the Europe. Also they are residents of the bibles of dark drum and bass, and hardcore, Therapy Sessions and PRSPCT.

Known widely in the circles of the darkest drum and bass for their heavy sound, with release "the Chase EP" on Eatbrain the twins demonstrate a complex understanding of neurofunk, moving deftly between verdant sci-fi beauty and dense raw energy. The release is packed with dense energy for the dance floor, bringing Gancher & Ruin firmly further into the Eatbrain fold and cementing their place in the label's powerful roster.

Recently, Gancher & Ruin have expanded their musical scope to include live shows with fantastic mashup of many music styles in one!

Prepare yourself for the ultimate set of the heaviest drum and bass hits by the twins known as Gancher & Ruin! They’re famous especially for their great shows and production which brings fantastic emotions and a great push of adrenalin to the audience.

This russian duo essentially belongs to parties such as Therapy Sessions or PRSPCT XL where they‘re destroying the audience with their unique and hardline sets.