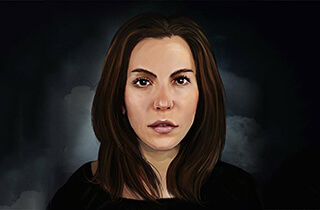 Julia Marks is a multifaceted artist. Singer, song writer, lyricist, MC, music producer and voice diapason, she continues to display a stunning musicality which has developed across a lifetime dedicated to her art. From her beginnings in the church choir at the tender age of seven, to her background in pop-jazz vocal art at the private Moscow studio of acting, her professional singing career is just as eclectic as her voice.

From a young age, she learnt that singing was her first real talent, and the one gift she could do better than any other. To this day, she continues to study different vocal techniques within rock, jazz hip-hop and soul, always striving for her audience’s wow-reaction, especially whilst debuting her impressive vocal ranges.

As well as featuring in many jazz and rock bands as a vocalist, becoming well-known on the major Russian city live circuit, she also took part in the infamous Russian Hip Hop battle InDaBattle during 2010, becoming the first female to reach the competition’s finale. However, despite her love for hip-hop she began to understand the necessity of diluting her vocal parts to develop more recitative.

When looking at her own musical preferences, it’s easy to see why Julia Marks is so versatile. From Grunge to Japanese Ambient, she flexes an intimidatingly diverse musical repertoire. She claims she can ‘absorb terabytes of music and speak about it for hours and hours’ with music being her ‘main and purest passion’. It’s almost impossible for her to single out one artist or genre as being the most influential, but nevertheless she highlights Eartha Kitt, David Bowie, Stevie Wonder, Q-tip, Damon Albarn, Bjork, Takamasa, The Prodigy and The Chemical Brothers. Julia Marks has spent her life homing in on the world’s greatest artists.

Julia Marks has also been heavily present within the world of drum & bass. Having performed to several thousand people at the biggest drum & bass events in Russia – including World of Drum & Bass and Bassland, she’s also taken part on releases for the likes of labels Program, Lifted Music and Renegade Hardware and for artists such as Magnetude (where she has been instated as their official vocalist). Working with some of the most notorious players within the scene, she became a staple part of their back catalogues, further pushing herself across a wide variety of platforms and tastes. Her undeniable musicality was also clear on her offering for Dutch label Fokuz Recordings, proving yet again that her enviable vocal talent could fit a wide-ranging set of moulds.

However, she’s also delved into the sphere of music production and doesn’t just involve herself in dance music as a vocalist. A huge fan of analog synthesizers, she loves to incorporate their sounds into her live performances, using different percussions as well as a vocal processor to aid her presence. With a European tour laying just on the horizon, this exciting aspect will add an extra dimension to her artistry.

Her first big break is still ahead – an ambitious individual, she’s already set her plans in stone for 2017. With forthcoming tracks with the likes of Task Horizon, who’ve described her as “multi-talented, diverse and accompanied with an amazing voice” whilst being “one of the most gifted vocalists” they’ve had the pleasure to work with, she also has her solo Julia Marks project (produced by long-time collaborators Magnetude) in the pipeline, and a number of mixed tempo compositions in the pipeline. She’s a rarity; an artist who brings real meaning to the term and a name that will be on the lips of many in the near future.