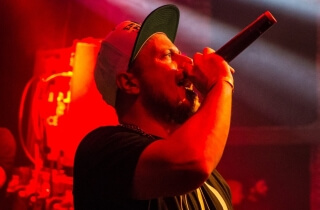 Professional Live MC/Vocalist for 12 years Lifesize MC can be seen taking his craft to the many stages live at festivals and nightclubs across Europe and the UK.

Performing along side the likes of State of Mind, Danny Byrd, Nicky Black Market, Tantrum Desire, Inside Info, Teddy Killerz to mention but a few Lifesize MC has developed a versatile and intricate MC style which sees him becoming a household name within the DnB Scene having also been nominated for Best MC in the Czech DnB Awards 2016, 2017,2018 and 2019.

His background started with HipHop, learning to freestyle at a young age, Lifesize MC always brings new flavours and lyrical content to every stage, club or venue he performs at. Singing is also a passion of his, which sees him performing liquid DnB vocals and freestyle hiphop with his 2 live bands currently performing across the Czech Republic.

It’s fair to say that LifeSize MC brings something a little different to the MC package being a true freestyle mc and vocalist with an unrelenting love for Drum and Bass. His ability to know when and when not to MC is a key styling for the Prague based MC from the UK not to mention the double time, super sonic fire he brings to the microphone.

2016 was the year of his first official DNB release ‘Golem’ on Kill Tomorrow Records with Russian producer Tobax. Signing also to Druid Records tracks with RedPil are also awaiting release.

2017 was the turning point for Lifesize MC as he joined the Czech DnB Crew Drumbassterds Crew having been a resident of their legendary ‘Double Trouble night for almost a year. Then came a release and signing to Delta 9 records as LifeSize MC provided vocals for FX81:94 by Stoner & Dottor Poison. The track ‘Exhibit’ produced by Aveho was then released on Black Inferno Records USA and as if he wasn’t busy enough, Lifesize MC found the time to team up with Czech Based Label Empire Records for a host of new performances, shows and tracks in the pipeline. It doesn’t stop there with new tracks from Druid, Delta9 Raving Panda, Kill Tomorrow being mastered ready for release, the future looks exciting for Lifesize MC!

2019 Lifesize has his first release on Blackout with State of Mind.

2020 was the year of Covid-19 that saw Lifesize release his debut HipHop album ‘Sign of the times’ on his own Label - Affliction Audio.

2021 has already brought releases on his new lofi project Lofi Hifi which have gained global exposure. Beyond this he has also launched a mew label for liquid dnb called T3MPL Music.