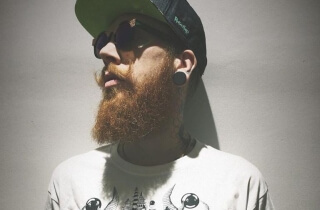 Mr. Multiplex is a truly unique MC, a diverse lyrical cannon who is guaranteed to make every crowd bounce. His background as a punk/rock singer and his knowledge of DnB and Jungle music means he has the ability to adapt to every performance.

The Dutch squatting scene was the gateway for Mr. Multiplex. He found himself at an illegal rave where he met and danced with miss Jungle for the first time and fell in love. This inspiration led to organize a party with friends called ‘Cultural Evolution’ - which was an immediate hit. This event fused with ‘Utreg Massive’ where Mr. Multiplex ended up working with Chakra MC.

From that moment on, Mr.Multiplex started his quest to be the best artist he could possibly be, challenging and pushing himself every time he performs.

After playing in almost every big venue in the Netherlands from his base in Utrecht, he met Black Sun Empire who chose to make Mr. Multiplex their resident MC for ‘Blackout.’ Mr. Multiplex has since held down many more residencies including; Kaputt! (NL), Vandal Crew (FR), Korsakov (NL), Cheeky Monday (NL), NoizeSuppressor (IT) & Roots (UK).

After these first residencies things accelerated for Mr. Multiplex and within the next few years he MCed with names like Andy C (UK), Noisia (NL) Aphrodite dj (UK), Mefjus dj (UK), Iciclemusic(UK) & CongoNatty(UK). To name a few highlights of his career so far was playing at Lowlands in 2013 in front 15.000 people and to 85,000 people at Dominator Festival in 2016.

Since the birth of his MC career in 2004, he stays focused on innovating his technique and keeping up the work rate. In many ways, things have only just begun for this multi-talented, multi-genre, Mr. Multiplex!