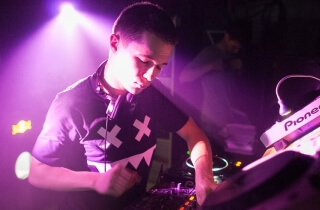 Proving himself with originality and precision, Nickbee's signature approach to drum & bass has drawn the attention of many. The young Ukrainian has taken the world by storm, having releases covering every shade of neurofunk. With substantial support, Nick has his sights set on the top of the world, 2015's the year he's going to get there.

It took only 2 years for Nickbee to explode onto the scene. With releases on Dispatch, Invisible, Mindtech and Horizon under his belt, he had his sights on bigger prey. Nick continued to flourish and develop his signature sound, piercing drums beautifully arranged to compliment the aggressive but pristine bassline. After perpetually developing his knowledge and style for 3 years, having several small EP hits on numerous labels and becoming more and more known, he finally caught the attention of Neurofunk giants, Eatbrain.

The EP, titled "Animal Rage" saw Nickbee take a bold step into the neurofunk scene. The highly acclaimed EP got the ball rolling giving Nick the momentum to release his own LP a short while later on Dispatch Recordings. Since then, he has seen support from the likes of Inspector Dubplate, Bad Taste Recordings, Redlight Records and Vandal Records.

After years under the wing of Invisible Recordings and Noisia, Nick's future is sealed with success. 2015 is sure to be an important year, with big releases lined up already. Keep your eyes and ears peeled for Nickbee, 2015 is his year.