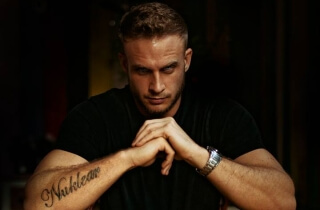 Nuklear MC has been a rising force in Drum & Bass in recent years. Hailing from the UK and known for his dark lyrical content, Nuklear has become a household name of the Drum and Bass scene as one of Eatbrain’s frontline MCs, and among other events around the world. Gaining notoriety and working with a vast array of talented producers, Nuklear has built up a far reaching play list.

One of his earlier collaborations was released on Eatbrain’s epic first album “Tales Of The Undead” with a monstrous track named “Killcode”, produced by Qo and then later remixed by Mindscape. Killcode received a huge amount of support from some of the biggest names on the scene. This was only just the start of many powerful features to come, as Nuklear has gone on to work in the studio providing his distinctive vocals for artists such as Audio, Prolix, State Of Mind, DC Breaks, Tantrum Desire, Optiv & BTK, Maztek, Mob Tactics, Telekinesis, L 33 plus many more, gaining releases on some of world’s leading Drum & Bass labels, including Ram Records, Virus Recordings, Eatbrain, Viper Recordings, Renegade Hardware, Citrus Recordings and a great deal more.

Not only is Nuklear at home in the studio, but he's is also welcomed to headline on stage, performing live with the likes of Chase & Status, Netsky, DJ Fresh, Calyx & Teebee, The Upbeats, Drumsound & Bassline Smith, The Prototypes & Sub Focus to name just a few. Through his lyrics and dedication to the music Nuklear has gained recognition from figures across the industry and is known for having an atmospheric presence on the live stage - a skill that has taken him to some of the worlds biggest Drum & Bass events, including hosting the main stage at the iconic Let it Roll festival. It seems that Nuklear is a force to be reckoned with and definitely one to keep watching!