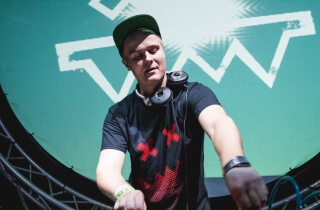 Petr Vicher aka Qo is an upcoming drum and bass dj and producer from Czech drum and bass scene. His first contact with mighty sound of drum and bass are dated somewhere around 2001/2002, a "golden era" of drum and bass - as he said. It was time of techstep duo Konflict, which was (and still is) one of his biggest influences.

Workin on his own sound for years, building his name with releases on Close 2 Death, Trust In Music, and Disturbed, in 2011 he finally get a debut 12" release of tracks "Infected" and "War Stomp" on one of most iconic labels of drum and bass - netherlands Citrus Recordings. From this time, his sound is defined somewhere between techstep and neurofunk - hardhittin', full-of-bass-facerippin' techy drum and bass. He also gained succes with his next single "Distress Signal" (with vocals from Hostile MC) and "Total Control" on Disturbed. Then the „Armored Core“ released on wax on british label Close 2 Death with dj support from big names such as Optical, Ed Rush, BSE, Audio, Chris Renegade, Smooth, Optiv, Phace, Chris.Su and others.

Nowadays, he is working on a few new tracks and projects like Ep for Hungarian Eatbrain to name just one. You can expect both solo tracks and also collaborations with czech and foreign producers.