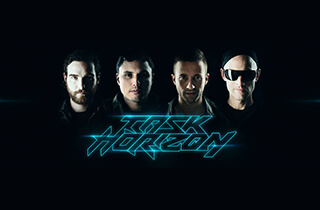 Since the beginning, Aaron von Schroeder, Jean-Michel Thomet, Florian Sutter and Tim Kleinert have been heavily influenced by the primordial, pounding sonics of drum & bass. Born in Switzerland, and known by their stage name Task Horizon, they drew on the long, dark winter months to help craft their music in sonic solitude. Against this backdrop, they’ve seen their reputation steadily grow, moving, with each technologically unsurpassed record they’ve released, from strength to strength.

The four artists’ individual journeys began at a young age. Aaron was introduced to the early electronic music of the legendary figureheads Klaus Schulze and Jean-Michel Jarre. Aaron’s passion for electronic music was nurtured throughout his teenage years, when he was introduced to the 174bpm genre. Hooked instantly by its energy and mood, this newly found art-form became the pivotal point of his entire life. He’d go on to buy a pair of turntables at age 20, becoming a regular buyer of records, always scouring through collections to find the most contemporary sounds and was enlisted at the Audio Engineering School in Zurich. Aaron set up his own recording studio in the bohemian setting of an abandoned and dilapidated factory plant nestled in the outskirts of Zurich. He then found companionship in Tim, a jazz piano player and music teacher at Zurich’s University of the Arts, who was also working out of the same setting. Tim could play his first chord at the tender age of 4, and it was from then on that he began his obsession with music. The factory is where Tim stationed his personal practice room and during his breaks, he’d comb through Aaron’s most recent productions. From here, their relationship blossomed. The unique encounters of a ‘mad scientist’ producer, an (equally mad) synthesizer virtuoso resulted in a merging of talents giving rise to a hard-hitting musical concoction and Task Horizon was born. Their unrivalled imagination and the combination of their forward-thinking production saw them sign a debut release on ‘Sudden Def’ in 2004. ‘Monkey Mash’ and ‘Guardian’ was their first single, piquing curiosity around the duo and showcasing their enviable production standards. This then lead them to a collaboration with Pedro Rodrigues, creating dancefloor anthem ‘Kill the Pain’. Released on the infamous C4C imprint, a pillar for underground drum & bass, their distinctive sound attracted many of the scene’s biggest players.

Florian began his career with drum & bass in 2014, after mastering the djembe (African drum) in his early years and spending his time poring over a vast range of musical instruments. Having worked as a light technician in some of Zurich’s most revered venues, as well as touring extensively with a punk rock band as a sound engineer, he’d always been deeply entrenched within the live circuit. Florian joined Aaron and Tim soon after and the duo became a trio.

Finally, Jean-Michel, who also works as a certified audio technician, both, on professional film sets and teaching location sound at the School of Audio Engineering SAE in Zurich, joined Task Horizon in 2015. His wide musical taste, ranging from Audio Machine to the hard-hitting sound of Kill The Noise, is reflected in his music, and works its way directly into Task Horizon’s output. Together, their formidable team have been proved to be unshakeable.

Also releasing on DCSI4, Forbidden Society, Dissected Culture, Mainframe and Fokuz Recordings, Task Horizon have become a heavyweight part of the drum & bass back catalogue. Being on rotation across the radio airwaves, Task Horizon were quickly solidified as a force to be reckoned with. As well as their ‘Body Tetris’ release on Blackout Music in 2016, they’ve also released on their own imprint Evolution Chamber. Formed as a creative outlet without restrictions, they dropped a string of critically acclaimed records. 2017 saw the relaunch of Evolution Chamber, after the label took a brief hiatus which allowed the group to tour extensively. Performing globally, including DJ sets across the Atlantic on their North and South American tours, they’ve taken their music to the world’s every corner. Alongside a host of overwhelming A-list DJ support from the likes of Andy C, Friction, Noisia, Audio, Cause 4 Concern and more, they pioneer a musical ability seldom seen. Their ascent looks to climb even higher for 2018... Already being held in such high esteem, this year Task Horizon are looking to hit legendary status.